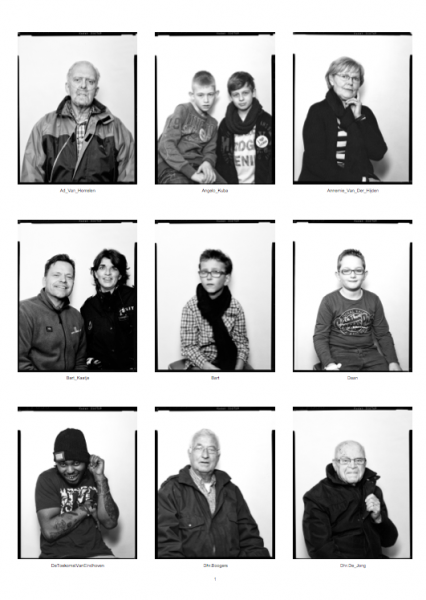 Sketch a future vision for Lievendaal. Without a plan or design, but with a number of clear principles. Formulated by the neighborhood itself. To create choices for the neighborhood in the future. What we do and do not want to invest in? What are our priorities and focus, and in what term? 12N Urban Matters literally made a portrait of Lievendaal.

Armed with a camera and questionnaire, along with a group of active photographers from the area, 12N went looking for the people living in Lievendaal. Why do you live here? Do you like it? Do you know many people? What could be better?

The Lievendalers were open and direct and, above all, reflected positively on living in their neighborhood. Yes, of course, the new supermarket should be available soon. And, of course there were comments on certain issues. But it is nice and quiet here, and we feel at home. However, as the discussions progressed, a few vulnerable themes emerged. Loneliness, health, and the quality of public space.

All the discussed topics during these conversations were processed in groups during The Tasting a few weeks later. The Tasting was organized with residents whose hobby was cooking. No fewer than 15 volunteers had delicious snacks available at various locations nearby. During a meal, people got to know each other better, although difficult themes would come up from time to time, such as new people with different customs in the streets.

The information has been collected and summarized in the book I LOVE LIEVENDAAL. It contains more than 100 portrait photos, as well as the ambition and agenda for Lievendaal in the coming years. The partners in the neighborhood, but especially the residents, will get to work on this! The book was presented during the Photo Expo Lievendaal.

12N shaped the process, collected ideas from and supported residents in their activities, and wrote the vision I LOVE LIEVENDAAL. And the residents? They felt they were heard and understood. They had really enjoyed the collaboration. “Next year again? Oh no, I mean: next month again?”