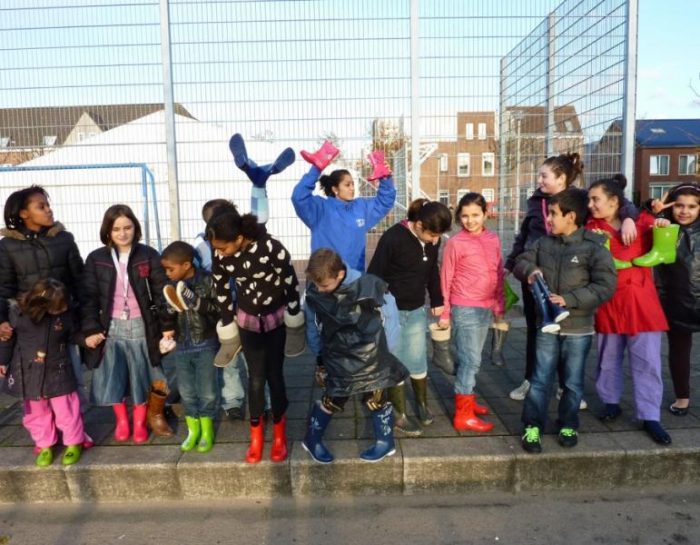 Rotterdam plays an important role in matters of climate change and water treatment. The city surfaces are highly impermeable and the water rises ever more frequently, the sewer system is unable to handle the amounts of water, resulting in the flooding of entire streets.

With Waterplan 2, the municipality has investigated several project proposals to tackle the problem. One of these proposes to create waterpleinen, or ‘water-squares’. These are squares which temporarily absorb rainwater from heavy rainfall before it enters the sewer system. The Bloemhof neighborhood was the suggested location for a first pilot. The borough of Feijenoord expressed its wish to investigate the details before deciding whether a square can actually be converted into a test-waterplein in this delicate, disadvantaged neighborhood.

The water square concept was created by Florian Boer of De Urbanisten in collaboration with the City of Rotterdam. The basis-research was conducted by Linssen & Van Asseldonk, who invited 12N Urban Matters to work with them on this project – a participatory session of creative, social/welfare and technical facets. Towards the end of the year, several discussions were carried out in the neighborhood with diverse interest groups. We organized three ‘Water Days’ with games, debates and room for questions and clarifications.

The borough was finally advised against creating water-squares due to improper basic attributes. Despite the high level of awareness to problems of water storage, the chosen solution entailed too many risks for the residents of Bloemhof. Security, hygiene, maintenance, and the uncertainties of a pilot project, plus the dangers of child-diseases combined to hinder the current implementation of the plan in this fragile neighborhood. The borough acted on the advice, though it has remarked favorably on what was learned during the intensive participatory session in an extraordinary residential area.