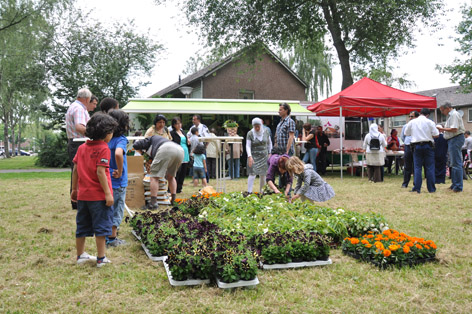 The backdrop: a northern suburb of Eindhoven consisting of 120 very small houses – just about as small as they come in urban social housing. An organically grown neighborhood with an eclectic mix of people, all of whom are slightly scarred by life and ended up in the neighbourhood simply because they had nowhere else to go.

Lots of changes have been made in the area recently. Five years ago, problems were on the rise, but after effective and sharp intervention, the corporation reinstalled peace and quiet. A coffee-corner, where residents meet field professionals, works incredibly well. One might conclude: much achieved, end of story. But the corporation was curious for more.

The public space surrounding the dwellings lacks clear structure and clear separation between public and private areas. The connection with the adjacent park is dodgy and undefined. Should something change, according to the residents? And if so, how? The group of residents is so diverse and yet so specific that it is hard to define their needs and wishes.

A typical challenge for 12N Urban Matters: investigating the relationship between spatial and social characteristics in the area. Commissioned by 12N, Mildred Montpellier (social and medical anthropology) and Wessel Dragt (spatial analysis) set to work.

The project was implemented in four phases. Firstly, needs and wishes of residents were defined through interviews and open discussion. Parallel, analysis of the spatial environment took place. Based on the results, four scenarios for the public space were developed. These scenarios were presented to the residents during a fun-filled activity in the park. Taking residents response and opinions into account, a final proposal for the outdoor area was presented.

The chosen approach presented an additional challenge. In parallel to all open conversations with the residents, background calculations were needed all the time: to what extent should the ambitions be tempered or stimulated? Design drawings and Excel sheets went hand in hand. Several residents also provided help, in form of pruning and clearing actions. The result is a safe, pleasant outdoor space, maintained by the neighborhood.